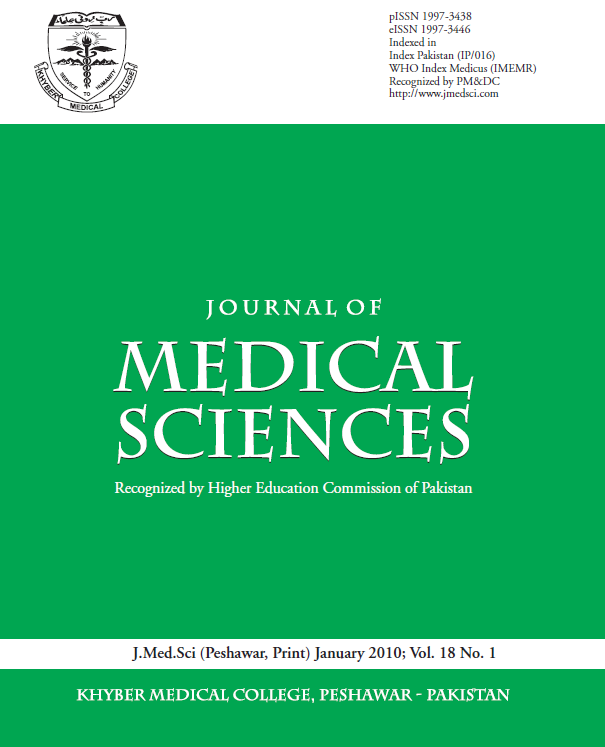 Objectives: To describe the causes and risk factors for primary postpartum hemorrhage (PPH) and its associated
morbidity and mortality at a tertiary care hospital.
Material and Methods: This descriptive study was done at the obstetrics and gynecology unit of Hayatabad Medical
Complex, Peshawar, from January 2007 to October 2008. All cases with primary PPH were included. Patient age,
parity, mode of delivery, cause of PPH, risk factors, management and outcome were recorded.
Results: Primary PPH was identified in 164 patients, 44 of these occurred at our hospital and 120 cases were
referred. PPH occurred in 106(64.63%) cases after vaginal delivery, 38 (23.17%) after instrumental delivery and
20(12.20%) after caesarean section. Causes of PPH included atony in 42 patients, tears and lacerations in 39,
retained placenta in 24, ruptured uterus in 18, placental pieces in 14, and 13 after Antepartum Haemorrhage (APH),
previous caesarean scar rupture in 6, combined atony and tears in 4 cases, coagulation disorder in 3 and inversion in
1. PPH following APH was the only cause more common in hospital delivered cases (P<0.008). Unbooked status,
grandmultiparity, prolonged labour and lack of active management of 3rd stage of labour were the common risk
factors. The majority were treated conservatively with uterine massage and uterotonic drugs. Surgical intervention in
the form of hysterectomy was done in 32 (19.51%) cases, mainly for ruptured uterus, repair of uterus in 6, and tear
repair in 39 cases. Retained placenta and placental pieces were removed manually. Major morbidity included shock
in 33 (20.12%), coagulopathy in 20 (12.2%), ICU admission in 10 (6.09%), renal failure in 4(2.4%) and anemia in 42
(25.6%) cases. Mortality was 6.9% (10 cases), 8 in referred patients and 2 in hospital delivered.
Conclusions: Early recognition of primary postpartum hemorrhage (PPH), appropriate treatment and timely surgical
intervention minimize the potentially serious outcomes.