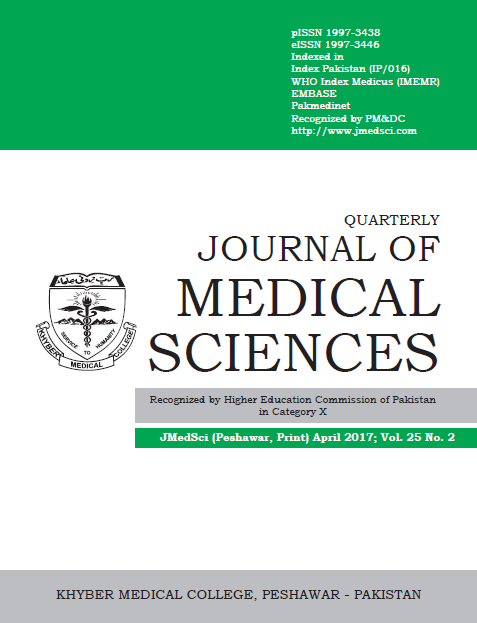 Objective: To determine the causes of maternal mortality, the three delays contributing to maternal mortality and the perinatal outcome in a tertiary care hospital.
Material and Methods: This descriptive study was carried out in Gynae ‘A’ ward of Khyber Teaching Hospital (KTH), Peshawar, Pakistan from January, 2011 to December, 2015. All the maternal deaths were analysed. The information and relevant data was obtained from the patients record and mortality register. Fortuitous deaths and deaths due to gynecological causes were excluded from the study.
Results: The maternal mortality ratio for the five year period was 278/100,000 live births (53 maternal deaths /19052 live births). Fifty (96.2%) of them had direct causes and only two (3.7%) had indirect cause. The most common causes being post partum hemorrhage (PPH) in eighteen cases (33.9%), eclampsia in fifteen cases (28.4%) and suspected pulmonary embolism in eight cases (15.0%). The indirect deaths were due to rupture of aortic aneurysm (1.8%) and severe cellulitis of the submandibular region, obstruction the airway (1.8%). Majority of the patients encountered multiple
delays. First delay was the major contributor (64.7%) i.e. delay in deciding to seek appropriate care. 32% of the patients encountered second delay i.e. delay in reaching the appropriate facility.
Conclusion: The leading causes of maternal deaths were PPH, eclampsia and septicemia, all preventable , if the first delay is addressed timely and promptly. A majority of them suffered first and second delays in their management.