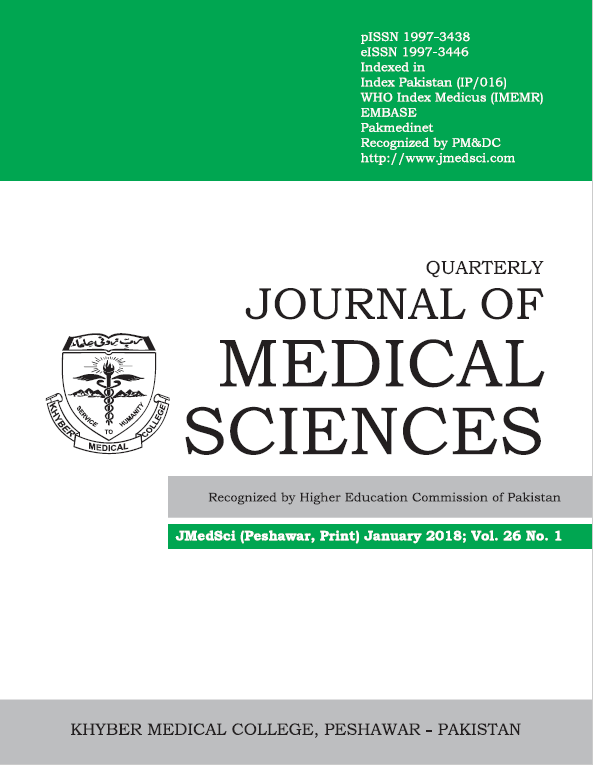 Objective: To analyze the clinical presentation, epidemiology and laboratory results of various types of leukemia at a
tertiary care facility in Peshawar.
Material & Methods: Bone marrow biopsy reports from January 2016 to March 2017 were studied and 145 cases of
leukemia were detected amongst a total of over 500 reports. A proforma regarding the relevant information including
epidemiological features i.e.name, age, gender, address, clinical features, physical exam findings and results of bone
marrow biopsy and other laboratory tests was filled.
Results: Bone marrow reports of 145 cases were analyzed. 49.7% patients were diagnosed as having ALL, 26.9% were
having AML, 9.7% patients were detected with CLL and CML was found in 13.8% patients. Males were affected more
(87) compared to females (52). Most of the patients were from Afghanistan, which accounted 43 (29.65%) of cases.
Fever was found in highest number of patients and accounted for 101 cases followed by pallor which was found in 82
cases. Other symptoms include malaise, body aches, fatigue, petechiae, bruising, sweating, weakness, headache,
dyspnea, hepatomegaly, splenomegaly and lymphadenopathy.
Conclusion: In all types of leukemias ALL was predominant having ALL-L1 as the most common sub-type. Fever was
the most common symptom followed by pallor. Males were more commonly affected compared to females.