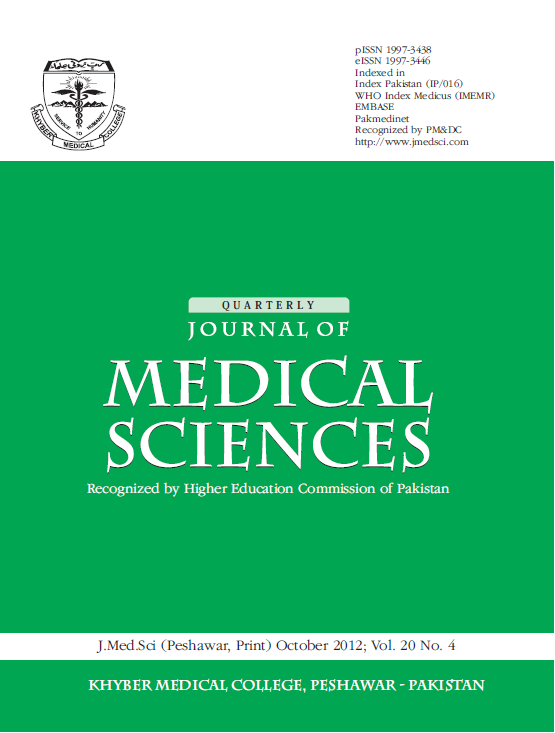 Objectives: The main objectives were to study seasonal variation and clinical presentation of malaria in children.
Material and Methods: It was a retrospective hospital based cohort study conducted by the Department of
Community Medicine in Pediatrics Unit B of Khyber Teaching Hospital, Peshawar. The clinical records from
September 2008 to September 2009 were taken for analysis. A total of 184 cases treated for Malaria were included in
the study. The age limit was up to 18 years including both male and female patients admitted into the ward. A
questionnaire was formulated after thorough literature review, according to our aims and objectives. Data was
obtained and processed manually, and then presented in tabular and graphical manner.
Results: Among the 184 cases, 28% were females while 72% were males. The highest numbers of cases were
reported in June which was 17%, followed by July 11% and September 12%. Clinical presentation of Malaria
included fever, fits, anemia, respiratory tract infections, diarrhea and vomiting. Three major types of malaria were
mainly found which included simple malaria, cerebral malaria and clinical malaria. The age group most affected was
found to be up to one year of age, while the incidence slowly declined with increasing age. Out of 184 cases 81%
received oral treatment, 53% of which received anti malarial drugs. Parental treatment was given to 92% of the cases.
Anti Malarial drugs were given to a total of 71% cases. After treatment, 96% cases showed improvement in health
while only 1% case did not show any progress as it were discharged on will. Death toll was 3%.
Conclusion: It was concluded that malaria still remains the major cause of infant morbidity and mortality in
developing countries like Pakistan. The peak season for malaria was from June to September. As malaria can present
with different (mild to severe) signs and symptoms, the clinical manifestations seen in the children under study were
ranging from mild headache and diarrhea to severe jaundice and fits.