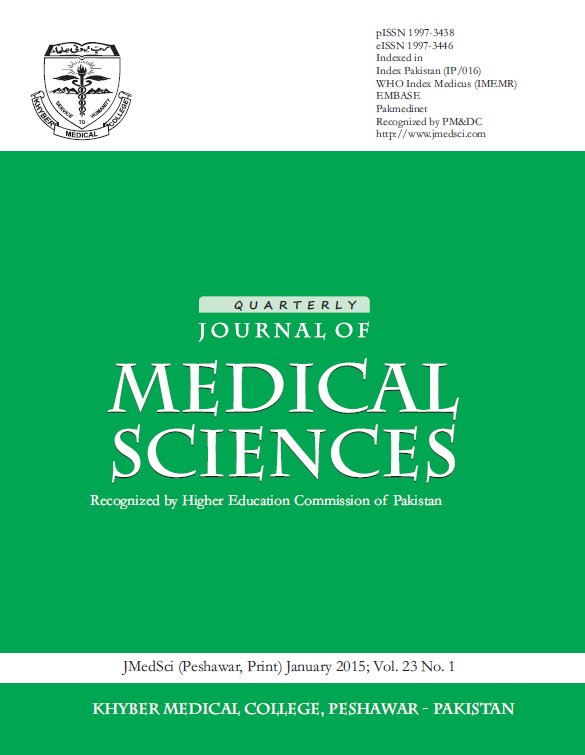 Objective: To study and explore the predominant causes and patterns of injuries in burn patients.
Material and Methods: This cross sectional study was conducted in Surgical Unit A of Khyber Teaching Hospital, Peshawar
from July, 2013 to June, 2014. The study population comprised of male and female patients afflicted with burn
injuries. Patient characteristics (age, gender) causes, mechanism and percentage of total body surface area (TBSA)
burnt were explored. A detailed history was taken and examination done before treatment was started. Percentage of
burn was determined using ‘rule of nine’. For statistical analysis, patients were divided into different groups and results
expressed as means and percentages.
Results: During the study period, 242 patients were admitted with burn injuries. Ages of patients ranged from 1 to
91 years. 148 (61.15%) patients were males and 94 (38.84%) were females. Out of the 242 patients, 203 sustained
accidental burn injuries, while 39 sustained suicidal injuries. Sixty-four patients sustained scald burns which included
39 males and 25 females. Sixty-three patients sustained injuries from kerosene oil. Number of patients sustaining
burns from electricity, flames and gas cylinders were 37, 47, and 30 respectively. Out of a total of 94 female patients,
26 sustained injuries from kerosene oil. A mean 37.06% area was burnt in female patients, whereas 36.48% area was
burnt in male patients afflicted with burns. No significant relationship existed between the % TBSA burnt and gender
of patients included in the study.
Conclusion: Intentional self-inflicted burns, female gender, and scald burns and burns from kerosene oil would largely
contribute to a high mortality rate in hospitalized patients.