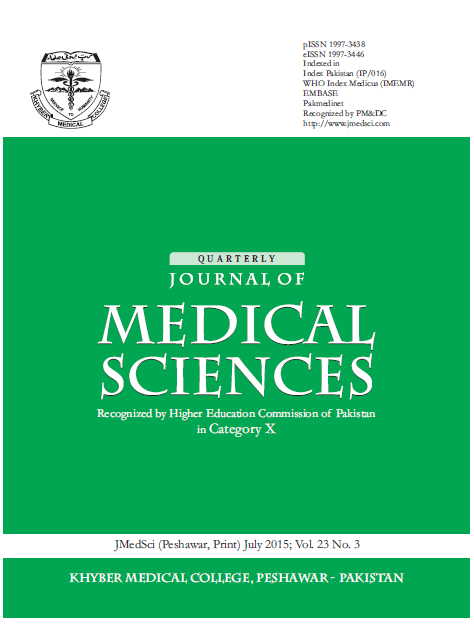 Objective: To evaluate performance (sensitivity & specificity) of a range of phenotypic tests which are currently used in tertiary care hospitals for the indentification of S aureus and to identify an optimal phenotypic test that is reliagle and cost effective and can be used with confidence for confirmation of S. aureus.
Material and Methods: The present study was conducted at clinical microbiology laboratory department of Pathology of Northwest General Hospital and Research Centre, Peshawar from January 2012 to September 2013. The study group consisted of 300 samples were collected from different clinical sources i.e. patient’s blood, body fluids, pus swabs, wound swabs, urine and sputum. During sampling safety methods were adopted and data were collect regarding age, sex, types of specimens and present health condition were also recorded.
Results: All clinical samples evaluated with slide coagulase (SCT), mannitol salt fermented test (MSA) and DNase test the result were 95%, 87% and 86%, respectively. Combination of these tests with different sera used in SCT their sensitivity results increased considerably. The human plasma when used in SCT test the positive results were 95%, but when used in combination with MSA test and DNase test then sensitivity increased to 98% and 96%, respectively. Similarly, while using horse plasma, 90% were slide coagulase positive and combination of SCT with mannitol test and DNase test depicted 94% and 91% positive results respectively. In similar manner, when cow plasma was used, slide Coagulase test showed 85% sensitivity and in combination with mannitol fermentation test and DNase test depicted 87% and 86% sensitivity, respectively.
Conclusion: It is concluded that there is no single phenotypic test that can give 100% reliable identification of S. aureus and we have to use combination of tests for maximum reliable results. The combination of slide coagulase test with mannitol fermentation test provide the maximum reliable results while using human plasma followed by using horse and cow plasma.