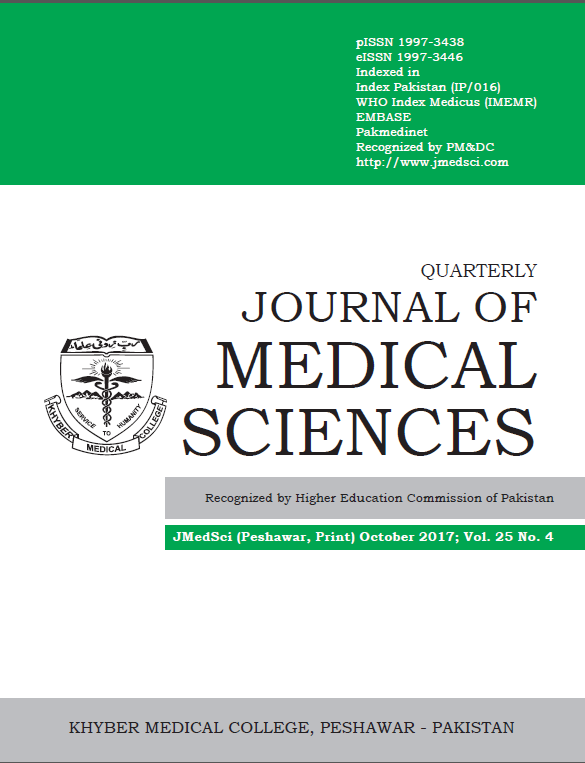 Objectives: To determine the role of CRP in predicting severity of acute cholecystitis.
Material and Methods: This is a retrospective cross sectional study conducted at department of surgery and Pathology,
Khyber teaching hospital, Peshawar between April, 2016 and April, 2017.This study included a total of 150 patients
divided into three equal groups(mild, moderate and severe) on the basis of Tokyo acute cholecystitis severity guidelines.
Each patient had his serum CRP quantified. Data was analyzed by using SPSS version 16. Means ± SD were
measured for CRP in each group. Furthermore, means of CRP were compared amongst the three groups by using
One-way ANOVA. ROC test was done to check the specificity and sensitivity of CRP.
Results: Mean age of all the participants was 39 ± 3.94 years. Female population made 66.66 %(n=100) of the study
sample while 33.33% (n=50) were males. Mean CRP values were, 24±3.14, 40±4.15 and 52±1.34 in the mild, moderate
and severe acute cholecystitis groups respectively. One-way ANOVA showed a statistically significant difference
between the three groups, P<0.05. Moreover ROC analysis confirmed that at a CRP value of less than 18mg/dl,has a
sensitivity and specificity of 76 and 84% respectively and excluding moderate to severe cholecystits.
Consclusion: CRP is a marker of severity of acute cholecystitis and can truly differentiate between different grades of
acute cholecystitis.