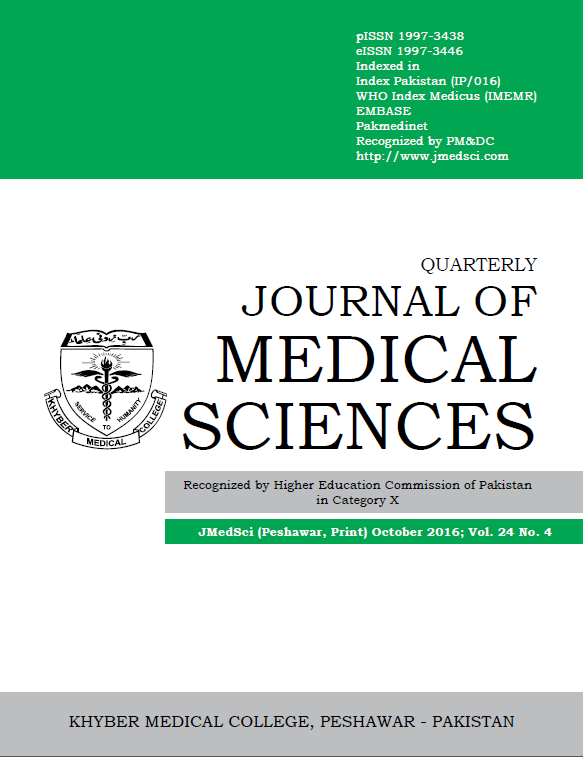 Objective: To explore the perceptions of MBBS students and their examiners regarding OSCE who appeared in the
final professional MBBS examination in 2015.
Material and Methods: In this cross-sectional study, a validated and pretested questionnaire already used by Khan M
et al, in a similar study was distributed among 250 final year MBBS students and 14 examiners soon after the completion
of their OSCE in the Department of Medicine of Khyber Teaching Hospital (KTH) Peshawar. Questions were asked about
any pre-exam orientation regarding OSCE, exam content, quality of performance, validity and reliability, learning opportunities,
stress factor and its comparison with previous exam systems. The data was analyzed using SPSS version 16.
Results: A total of 250 students participated in this survey, 150 (60%) of which were males and 100 (40%) females. Two
hundred students (80%) stated that exam was fair and comprehensive, 88% believed OSCE was more stressful and
mentally tougher than traditional exams like multiple choice questions (MCQs), short answer questions (SAQs) and
viva. However, 90.8% of the examinees reported that OSCE provided an ample opportunity to learn and compensate
for areas of clinical weakness despite a huge stress factor. Two-hundred and ten (84%) students considered OSCE as
a valid and reliable format of clinical assessment and 90% pledged that they would recommend OSCE for use in future
as a tool of assessment in medical education. The total number of examiners conducting the exam was 14, 10 (71.4%)
of which were males and 4 (28.6%) were females. Majority of their statements correlated with those of the candidates
examined. However, there was a sharp contrast in what they felt about stress levels and effect of gender, ethnicity and
personality on the outcome of OSCE. Only 8% of the examiners (vs 88% of the candidates) thought that OSCE was
very stressful and 14.3% of them (vs 64% of the candidates) were of the view that factors like gender, ethnicity and
personality can affect the results of OSCE.
Conclusion: Majority of students and examiners thought of OSCE as a fair, standardized and transparent way to
assess clinical competencies though students found it tougher mentally in contrast to what the examiners perceived.
Moreover, the element of pass by chance and bias was less in OSCE compared to other practical exams like SAQs,
long questions and viva.