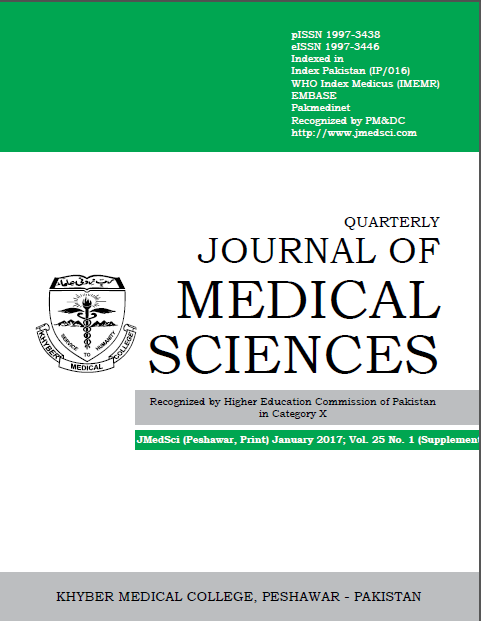 Objective: To assess the core knowledge of urology of final year medical students of Khyber Pakhtunkhwa where a
non urologist is assigned to teach the section of urology in surgical curriculum.
Material and Methods: It is a KAP cross sectional study conducted by department of urology, Institute of Kidney
Diseases, Hayatabad Medical Complex and Department of Urology Lady Reading Hospital, Peshawar, Pakistan in 6
medical colleges of KPK from January 2014 to March 2014. Total of 180 final year medical students were enrolled in
study (30 each from every college). A pre tested proforma comprising 10 single best MCQ of K1 level was designed
from section of urology prescribed in PMDC curriculum from Bailey & Love’s Short practice of surgery 26th edition for
assessing the knowledge. Each correct answer was scored 10 marks and incorrect as 0. Student with minimum marks
of 50 were declared pass according to PMDC regulation. Separate proforma was designed for attitude and practice.
The entire questioners were filled upon in presence of volunteer to avoid bias for referring to colleagues or books. Data
was then analyzed on SPSS.
Results: Total of 180 students participated in the study. Female medical students were 95 (52.7%) while male students
were 85 (47.2%). Regarding total score of knowledge, 66 (37%) students passed the questioner by getting 50 or more
marks. Female medical students scored better than male student (female 45 68.1% vs male 21 31.8%). Out of 180
students, 126 (70%) had never seen TURP, 153 (85%) had never seen ESWL, 140 (77%) had never seen PCNL, 155
(86.1%) had never seen cystolitholapaxy, 144 (80%) had never seen TURBT, 160 (90%) had never seen PCN insertion
for pyonephrosis. Very unfortunately 108 (60%) had never performed digital rectal examination of prostate while only
36(20%) had performed urethral catheterization. 54 medical students (30%) opted for becoming urologist in future (male
42: female 12). 146 (81%) students recommended a urologist to teach them the section of urology while 34 insisted for
general surgeon to teach portion of urology.
Conclusion: The core knowledge of urology of final year students is not satisfactory in colleges where a non urologist
is assigned for teaching the portion of urology in surgical curriculum. Their skills are not up to the mark according to
PMDC guidelines. Still a good percentage opts for becoming urologist in future and majority recommended a urologist
for their teaching.